April 22, 2020
Grateful to the Greenwich Village Society for Historic Preservation for hosting my talk on the Blackwells and public health.

January 25, 2019
Who wants to work on the next book when it’s so much easier to talk about the last one? Honored to be included in the Meiji at 150 Podcast via the University of British Columbia.

August 16, 2018
My review of Tracy Franz’s My Year of Dirt and Water, in this Sunday’s New York Times Book Review.

December 2, 2017
A new essay, “Falling in Love with a Second Story,” in this week’s Publishers Weekly.

October 25, 2017
Great morning at Riverdale Country School, who were nice enough to livestream my talk.

August 2, 2017
Thrilled to be the recipient of a 2017 Public Scholar Award from the National Endowment for the Humanities for my work in progress, Sister Doctors, a biography of Elizabeth and Emily Blackwell.

February 18, 2017
A late-breaking review from The Japan News: “What a treasure is Daughters of the Samurai.”
read full review

January 6, 2017
New year, new project! “Meet the Blackwells,” a brief look at what I’ll be working on for the next stretch.

July 15, 2016
In case you’ve missed my talk, here’s a great video produced by the Retired Men’s Association of Greenwich, CT, where I spoke this week.

May 27, 2016
A new interview up at the Washington Independent Review of Books.

May 17, 2016
Paperback officially on sale! To celebrate, here’s a new essay on historytelling, at the Literary Hub.

April 15, 2016
My review of Lynne Kutsukake’s debut novel of postwar Japan, The Translation of Love, in the New York Times Book Review.

April 9, 2016
Asian Review of Books: “Superbly evokes 19th and early 20th century Japan, and to a lesser extent the 19th century United States, through the lives of these three remarkable women, who so dramatically influenced the evolution of their homeland.”
Read full review

January 28, 2016
Grateful to Booklist for including me in their Top 10 Multicultural Nonfiction list.

January 22, 2016
A new essay in the New York Times Book Review, on serendipity in the stacks.

January 21, 2016
Why aren’t more women writing history? Happy to be included in Bustle’s list of 25 History Books Written by Women, a great response to this recent article in Slate.

August 9, 2015
Washington Post: “[Nimura’s] descriptions of landscapes are poetic, and you’d be hard-pressed to find a novelist who is as deft at portraying relationships and inner thoughts…She skillfully bridges Japanese and American cultures, using the seemingly small story of three young people to tell a much larger tale of another time.”
read full review

August 3, 2015
Audiobook out this week from Audible: purchase here.

July 27, 2015
New essay up on Medium today, on the importance of letters–read it here.

July 18, 2015
Lovely article and excerpt in the Vassar Quarterly.

July 9, 2015
Los Angeles Review of Books: “In Daughters of the Samurai, Janice P. Nimura achieves the elusive dream of the historian, producing a work that will engage and satisfy academic and non-specialist audiences alike… Daughters of the Samurai is, perhaps, less a story of Japanese out of place in their country, than of women ahead of their time.”
read full review

June 24, 2015
Amazon makes Daughters of the Samurai one of its “Best Books of the Year So Far” in the category of history!

June 20, 2015
Dallas Morning News: “Daughters of the Samurai reads like a novel about the meeting of East and West and how it transformed the lives of three extraordinary young women.”
read full review

June 12, 2015
Daughters of the Samurai in Ireland! Talked to Sean Moncrieff of Dublin’s Newstalk Radio this morning.

June 9, 2015
Appeared on Portland’s morning show “AM Northwest” this morning.

June 8, 2015
Return to SF’s KALW: this time for an interview on “Crosscurrents.”

June 6, 2015
Tickled to be on KALW’S “West Coast Live” this morning in San Francisco.

June 4, 2015
The San Francisco Chronicle makes Daughters of the Samurai a summer pick!

June 3, 2015
Honored to participate in a videoconference hosted by the U.S.-Japan Council with veteran newscaster Fred Katayama. It’s up on YouTube or as a podcast.

May 23, 2015
The Japan Times ran this interview today: “The ‘Daughters of the Samurai’ Who Changed the Face of Meiji Era Japan”

May 19, 2015
Thrilled with this interview on the Wall Street Journal‘s Speakeasy blog: “‘Daughters of the Samurai’ Sheds Light on a Strange Chapter in U.S.-Japanese History”

May 8, 2015
The Seattle Times: “Nimura has written a superb history… This remarkable and beautifully written story—often as riveting as a page-turning novel—is both scholarly and accessible to non-specialists.”
read full review

April 28, 2015
Daughters of the Samurai is Booklist‘s Review of the Day!

April 27, 2015
Extensive and extremely generous review in the University Bookman: “The real strength of Nimura’s book lies in her ability to zoom and pan with the smoothness of a master historian.”
Read full review

April 4, 2015
My review of two novellas by Yasushi Inoue in the April 5 issue of the New York Times Book Review.

April 2, 2015
Win a copy of Daughters of the Samurai on Goodreads! Goodreads is giving away 20 copies: enter by clicking here between now and April 30.

March 19, 2015
The last pre-pub review is in: a star from Booklist! “Nimura brings the girls and their late nineteenth-century exploits to life in a narrative that feels like an international variation on Louisa May Alcott’s Little Women, so very appealing and delightful are their historic stories.”
Read full review

March 7, 2015
Just in from Publishers Weekly: “Through the sensitive weaving of correspondence and archival papers, Nimura produces a story of real-life heroines in this masterful biography of three samurai daughters sent to the U.S. after the Civil War.”
Read full review

Jan. 4, 2015
A starred review from Kirkus: “An extraordinary, elegantly told story of the beginning of Japan’s education and emancipation of its women.”
Read full review

Please check back for updates. 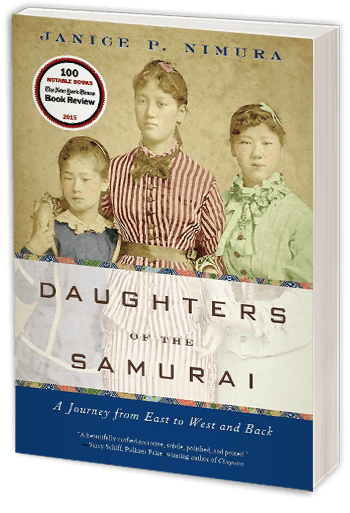