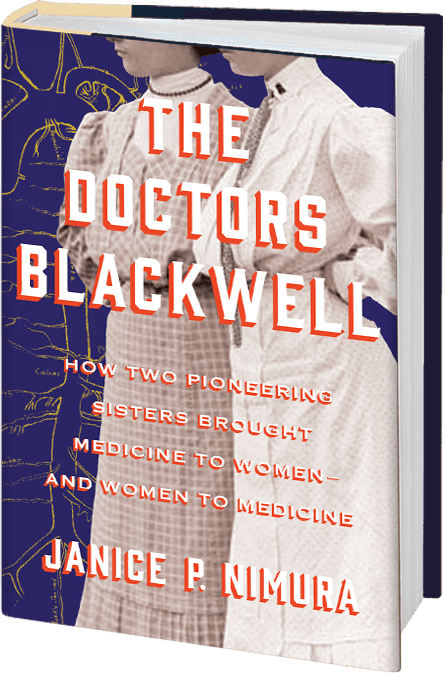 “Deftly, with a keen eye, Janice P. Nimura has resurrected Elizabeth and Emily Blackwell in all their feisty, thrilling, trailblazing splendor.”―Stacy Schiff

The world recoiled at the notion of a woman doctor, yet Elizabeth Blackwell persisted―in 1849, she became the first woman in America to receive an MD. Her achievement made her an icon―“I am convinced that a new & nobler era is dawning, for Medicine,” she wrote―but her sister Emily, eternally eclipsed, was the more brilliant physician. Together they founded the first hospital staffed entirely by women, in New York City.

Both sisters were tenacious and visionary, but their convictions did not always align with the emergence of women’s rights―or with each other. “Doubt is disease,” Elizabeth insisted. They prevailed against fierce resistance from the male establishment, moving among Britain, France, and America during a tumultuous time of scientific discovery and civil war. This major new biography celebrates two complicated pioneers who exploded the limits of possibility. As Elizabeth predicted, “a hundred years hence, women will not be what they are now.”

“A captivating biography. . . . In recounting the lives of two ambitious figures who opened doors for many who came after them, Nimura casts a thoughtful and revelatory new light onto women’s and medical history.”
–Publishers Weekly, starred review (read full review)

“Janice Nimura’s The Doctors Blackwell should be required reading in all medical schools, indeed for anyone who has ever consulted a doctor.  This rousing story of two brilliant and determined 19th century sisters is also a history of American medicine—how it was practiced and by whom.  That the Blackwells arrived in the United States during a cholera epidemic and made it their mission to provide medical care to the underserved, while also promoting the twin causes of women’s rights and abolition, brings this narrative hurtling into the 21st century, demanding our attention today.”
–Megan Marshall, Pulitzer Prize-winning author of Margaret Fuller: A New American Life

“The Blackwell sisters took on the medical establishment and won. They are heroines, not just of their time, but for every age. Their incredible story has been crying out to be told, and in Janice Nimura they have the ideal biographer. The Blackwells live and triumph again.”
–Amanda Foreman, author of A World on Fire

“Janice Nimura has gifted us with more than a splendid history of the Blackwell sisters. Gripping, vividly written, and moving, it is also a surprisingly timely history of the misogynist, limited, still evolving Anglo-American medical profession.”
–Blanche Wiesen Cook, author of Eleanor Roosevelt, Vols 1-3

“All doctors and all patients owe a debt to these eccentric determined brilliant characters, Elizabeth and Emily Blackwell, who found their way across the strange and bloody landscape of nineteenth-century medicine, and transformed it forever, all brilliantly conjured in Janice Nimura’s wonderful book.”
–Perri Klass, author of A Good Time to Be Born